Voice and designing without an interface

UX Designer Leanne Dobson rounds up the pros and cons of voice technology and what you should consider when designing for voice interaction.

Since 2012, there have been improvements in natural language processing and reduced error rates. Large companies such as Amazon and Google are pushing voice as ‘the next big thing’.

Currently, voice technology is largely employed for personal use in the home but in future we might see increased use in business and commercial contexts. For example, when trying to set up a conference call, imagine how great it would be to say a few simple instructions instead of faffing around with cables, conference phones and Outlook links.

Voice-first: smart speakers such as Echo and Google Home that have now been upgraded with screens, such as the Echo Show.

Sometimes the primary use of smart speakers seems to be to trigger BLIND CURSING when they:

But actually, the top personal uses are: 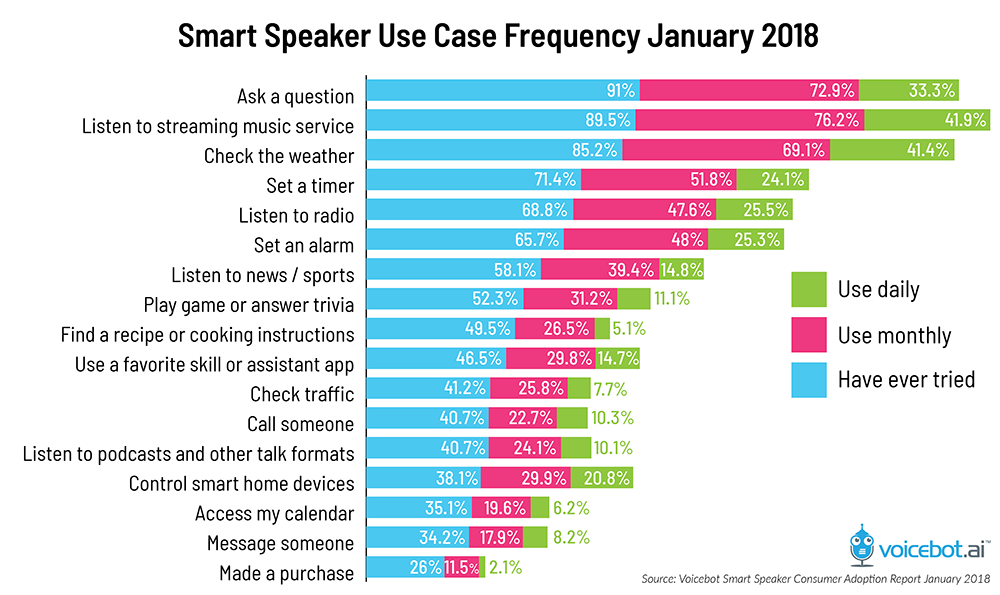 Voice-first is an efficient input modality that allows for multitasking and bypassing complex navigation menus for familiar tasks.
Screen-first is an efficient output modality where large amounts of information can be displayed to help reduce the burden on memory and convey statuses and visual signifiers for commands. This is what the Echo Show does (however it is rather random).

Integrating voice and screen into a single system is challenging and single-use devices tend to have a short lifespan. In a lot of screen-first cases, such as Siri and Google Assistant, the voice is an afterthought, creating a fragmented user experience.

With touchscreen devices, there can be missing functionality, where voice initiates a process but subsequent steps require touch interaction. However, this is improving. When I ask Google Assistant to play a song on Google Play, it starts the requested song without further intervention at least 80% of the time.

My personal experiences of using the Echo Show include hearing my 3 year-old son slightly mispronouncing “Alexa”. This doesn’t trigger the device and results in him shouting louder. I’ve also observed my mother-in-law, a non-native English speaker, struggling to pronounce certain words to make herself understood by both Echo and Google Home.

There are also concerns about corporate surveillance and voice search history being hacked.

Designing for voice interaction with accessibility in mind

The shift to voice can deliver huge benefits, from allowing people with dyslexia to interact without written text, to bringing independence for those with motor function impairment. It is important to consider accessibility when designing voice interaction. Here are some suggestions.

Deaf and hard of hearing

Voice and screen together

It is impossible to remember all the voice-only commands, although the Echo Show has a screen that prompts you with suggestions. There is a need for a set of standardised command phrases and keywords to allow users to intuitively navigate between different devices and their AI assistants.

Screen-first has the advantage of being able to display large amounts of information on a screen, reducing cognitive load for the user. Voice and screen need to work in unison for a truly effective user experience.