We love visual studio at OCC. It’s an incredible IDE for software and web development and Microsoft put amazing effort into keeping up with the direction developers find themselves moving.

For quite a while Visual Studio has supported Sass, specifically through the Web Essentials plugin, which has offered intellisense, CSS preview and compilation. But much of this functionality is being removed from the plugin because the broader developer community is moving to using build tools like Gulp (and it’s peers, such as Grunt) and Web Essentials wants us to use them too.

But how do we go about doing that?

Setting up Gulp in Visual Studio 2013

The first step is to install Node.js, the JavaScript server that Gulp uses to run its tasks. Importantly, you’ll need v0.10.28 (there’s an x64 folder in there, which most of us will want) as the more recent versions are not yet supported by the Gulp-Sass compiler plugin. It looks like this will be fixed very soon though, which is great!

The -g is a flag to install globally, so you can use the modules anywhere.

Now we can set up Gulp for your solution. Create a file called package.json in the root of your solution and add in the following information:

You’ll need to make sure those gulp and gulp-sass version numbers match those you have installed.

This will allow any other developer to come along and run npm install on this directory and Node will download and install everything they need!

Give Gulp some tasks

Create a gulpfile.js file in your solution and add the following JavaScript to get started:

Here we have three sections

Now, if we ran gulp sass-compile at a command prompt in our project, it would compile our Sass. If we ran gulp watch-sass it would start watching. But running commands all the time isn’t much fun…

The answer is to install the Task Runner Explorer Visual Studio Extension, which will give us some nice UI for running and automating Gulp tasks from within Visual Studio.

Once you’ve installed (and restarted VS) when you right-click on your gulpfile you’ll see a new ‘Task Runner Explorer’ option, which will open up a panel showing a list of your Gulp tasks on the left and some binding options (or the output of whatever has been run) on the right. 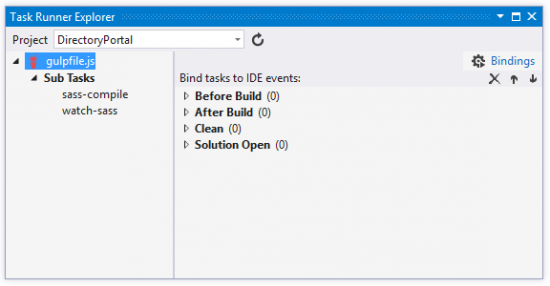 The icing on the cake is that you can right-click on one of your tasks and bind it to one of the following Visual Studio events:

Right-click on your sass-watch task and bind it to Solution Open. Now, every time you open your solution, Gulp will automatically start watching your Sass files and compiling them whenever it needs to – perfect!

What else can Gulp do?

Gulp doesn’t just do Sass compiling, it’s hugely powerful. Here are just a few of the tasks Gulp can help you with:

More good news as Visual Studio 2015 will come with first-class support for Gulp as standard, so these tools will be built right in to the IDE.