This year we have so many team members I have split this post in two; we’ll post the remaining projects soon. Here is the first set:

I worked on converting the configuration file for our distributed testing service from plain text to XML, something I’ve wanted to do for a while. As the configuration for the tests grows ever more complex, the plain text file becomes increasingly arcane and difficult to navigate. An XML file allows the configuration to be laid out in a more structured manner, and lets most text editors provide benefits such as folding and syntax highlighting. It also has an accompanying schema so that we can catch mistakes much more easily.

This work supports a longer term goal I have of getting the config file into SVN and splitting out parts which are likely to be changed frequently.

I looked at converting our tools that currently use SVN to use Git. We currently use the SharpSVN library to query our repository. There’s a SharpGit project in NuGet that’s supposed to be an almost direct replacement, unfortunately with only ~200 downloads it’s very immature and not up to the task. I chose libgit2sharp as the best alternative. This is a C# wrapper around the official libgit2 library. The library itself is well documented, the wrapper less so.

I was quickly able to convert the Macro Developer Tool (an internal development tool which uses the C pre-processor to avoid code duplication in SQL) to use Git as it only looks at the working copy to see which files have been added or modified. I then turned my attentions to the PFG (our patch file build tool). I soon learnt that this was not going to be so trivial.

The concept of a tag is somewhat different between Git and SVN, as is the idea of looking at the central repository to find the previous one (although I doubt we’ll all have the entire repo on our machines either). As it’s written, the PFG relies on there being a linear succession of changes between the previous tag and the current one. In Git it’s likely that we would branch out and merge in commits throughout the development of a tag. We would therefore need to compare the two trees without relying on their history. I am satisfied that this is possible, but more thought will be required than was possible on a hack day.

I spent the day looking into ways of visualising the structure of the ContrOCC database. The aim was to see to what extent it divides into modules which could in principle be more rigorously separated in future. The work in practice fell into three parts:

Extracting data on dependencies from our source data. I have a long standing prejudice against SQL’s own lists of dependencies and since I knew it wouldn’t be too much work I instead read dependencies out of the SQL source code using parser code borrowed from the PFG (our patch file build tool).

I next tried to graph dependencies as a box & arrow diagram. I used the MSAGL library and technically speaking it worked first time. With minimal effort I was able to produce a suitable diagram with tooltips showing the name of the objects.

However, when I scaled up to the 1000s of objects in our database it didn’t even try to produce a decent layout – it just stretched the whole graph out horizontally:

Whilst looking into ways I might influence the layout I stumbled across the idea of the Dependency Structure Matrix and immediately decided it was a better prospect. In true ContrOCC fashion I began writing my own DSM code and by the end of the day had an incomplete, tantalising but ultimately broken implementation.

I worked on a prototype of a new user interface layout for ContrOCC which would degrade better on small screens, but take better advantage of large (or at any rate tall) ones. This involved redesigning the Contract UI  so that it no longer contained tabsets, but instead a series of vertically stacked sections each of which can be individually expanded and collapsed. There are also a series of links along the top of the page which allow the user to jump to any section of interest. 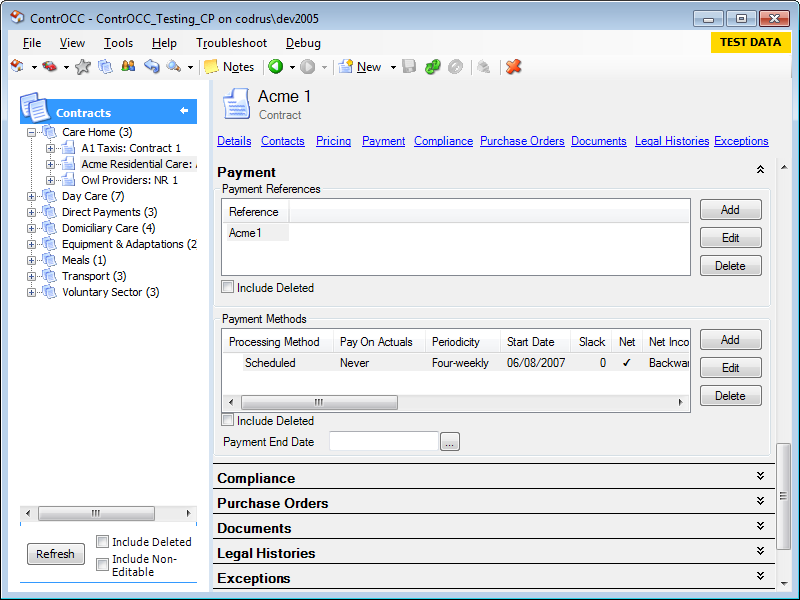 ContrOCC records details of client visits to be carried out, and can generate payments/charges based on those visits, but without verification there will always be an element of trust. This is a browser/smartphone-based add-on to ContrOCC to allow client-confirmed visit data capture.

Instead of requiring the service provider to verify attendance by relying on, for example, a client’s landline, the visitor hands the client their own smartphone, which may be their personal device, and the client enters a picture-based PIN. Pictures are used as potentially easier to remember than a numeric PIN. For this demo, I have used various types of balls, but obviously anything meaningful to the client could be used.

Linked to location-based data, the time and place is verified, with that data instantly available in ContrOCC and matchable against PO/Invoice data. Visit start and end are recorded, together with the option for the client and/or visitor to send a message to the LA.

For this demo, a smartphone surround is shown. Some LA branding has been applied, but it really needs design input!

The code is inline C#, borrowing concepts such as the “no-compile developer experience” from .NET vNext, where the developer never needs to build, just code and save. There is no solution or project, the website is opened directly in any version of Visual Studio, with system-wide code shared from App_Code. Development code is continuously compiled by aspnet_compiler into a deployable “build”, with a compile management screen showing ‘real-time’ code warning/error status.

The task I chose to undertake on Hack Day was to develop a tool that would parse PDF files such that the contents of the file could be inspected. I managed to get to the stage of recognising the PDF Header and Trailer, and converting the body into tokens which would be used to create PDF Objects.

One application of this utility could be to allow the ContrOCC generated PDF exports to be inspected and checked against a set of expected results. This would allow PDF exports to be checked during the automated tests. Initially, the automated tests would check that the text content is as expected and could be extended to include the positioning of the text and the type of fonts that were used in the export. Ultimately, once the structure of the files is more fully understood, this utility could be used to allow PDF files to be generated.

This was an ambitious Hack Day project that needed more than the one day that was allocated. I estimate that it would take at least a week to complete the parser with the appropriate automated test code.

Our current help technology has many good features, but lacks the ability to deal well with simultaneously providing descriptive (“what is this field?”) and functional (“how do I … ?”) help. While the text, being endlessly flexible, can easily encompass all kinds of help, there is no automated and structured means to point users to different paths through the content.

How it is now 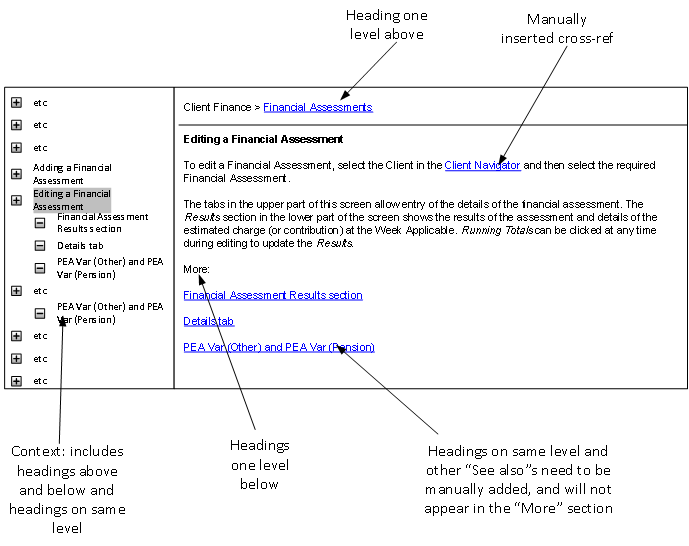 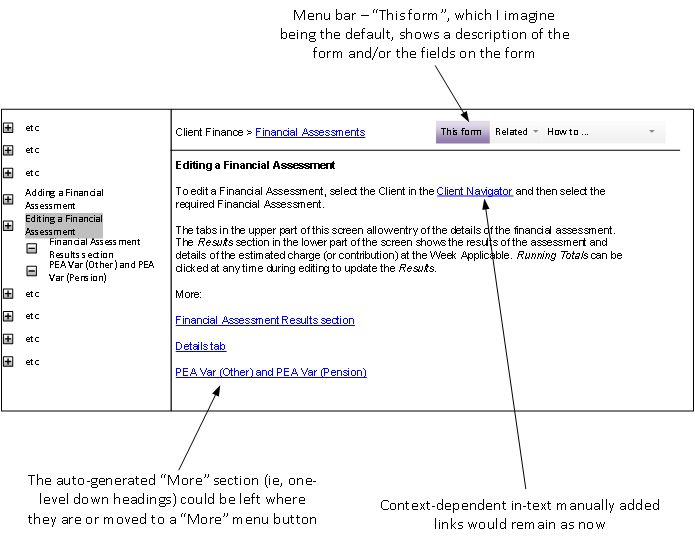 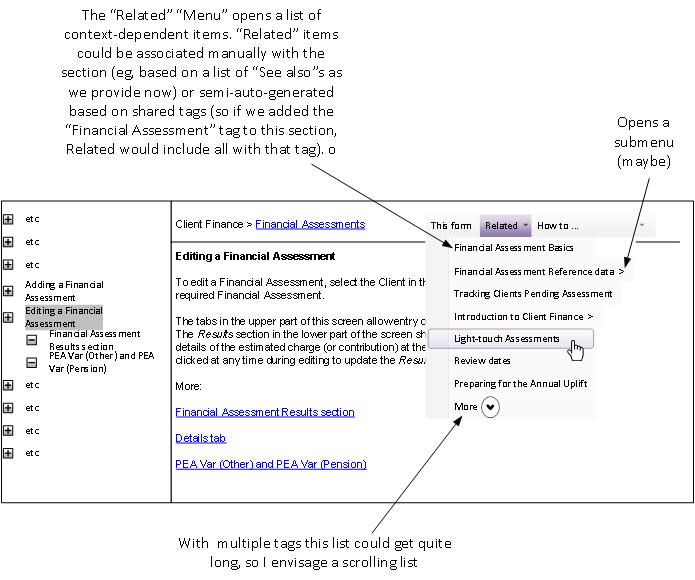 The How to menu 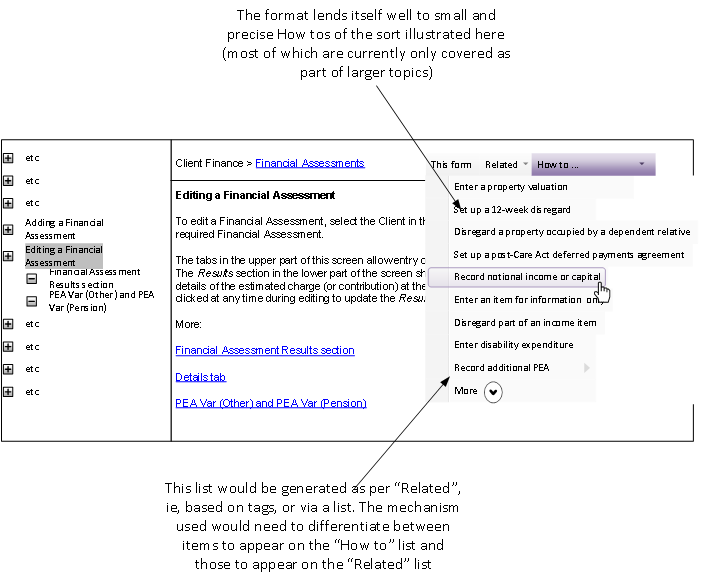 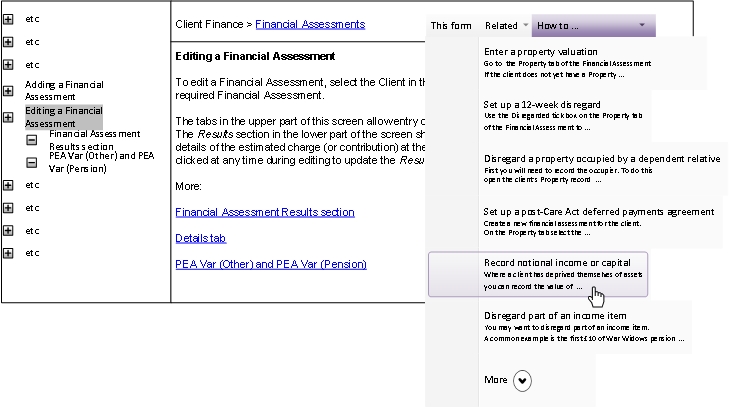 With significant help from Chris Smith I have created an “alternative” UI for OCCult (our internal timesheet system). This is not intended as a replacement for the existing timesheet entry form, but as an addition that considerably simplifies timesheet entry for people with particular kinds of working patterns:

The new UI is visually completed, and partly coded. There are still many bugs, and some features that aren’t implemented at all. Some staff have evaluated the new UI, and despite some networking problems which leave the demo file locked, and other MS Office installation problems on some workstations that prevent the new UI from opening, feedback has been broadly positive, with some negative. However, only a minority of staff have provided feedback. The most negative feedback has been from staff who are already happy with the existing UI and don’t see the need for an alternative.