OCC DevCamp has been a great opportunity to put the day-job to one side and try out some new technologies. Here are some thoughts on how I got on with them.

AngularJS is Google’s offering in the JavaScript application building framework arena. Having previously used Knockout I wanted to use a different framework for comparison. I’ve felt that Knockout isn’t especially well suited to large applications, and it seems to struggle in terms of performance when handling a large number of data bindings.

Angular comes with something of a learning curve (fortunately I shunted most of this on to Mel!) but after a week of use, it feels like a better choice for a larger application. The framework encourages writing code in a modular way, and it seems to be doing less magic in the background; surely good for performance. Data sizes in this application have been small, but there’s never been any indication that Angular has been slowing things down. More research would be possible if we choose to re-write one of our existing Knockout apps, but at first glance it doesn’t seem like that would be cost effective.

Recommendation: I would recommend using this again over Knockout. It would be good to see it put to work on a real project.

I’d been wanting to try out TypeScript for some time, since the prospect of writing JavaScript with straight-forward classes, modules, interfaces, etc. and compile-time type checking was a big draw. Again, I found there to be something of a learning curve, but it has been well worth it. There have been plenty of occasions when compiling my TypeScript file has revealed errors in code that I wouldn’t have found until running the application in a web browser if I’d been using vanilla JavaScript; obviously that adds up to a lot of time saved.

A couple of gotchas:

Recommendation: TypeScript is definitely worth using. You can start by just renaming your existing files with the .ts extension, and if it all gets too much you can simply drop back to plain old JavaScript.

Example: The best example of the benefits of writing well laid-out code with TypeScript and AngularJS together was when I wanted to drop Poll Graphs into three different web-pages served by our application. One had the main presentation and associated JavaScript, the other didn’t. The following code was sufficient to drop graphs into all three pages with no further work:

SignalR is a library for real-time web functionality. In the best circumstances it will use a WebSocket between server and client, but will seamlessly fall-back to older client-server mechanisms if required.

This was very easy to get started with, and has been very powerful. The code in our Hub class, which receives messages and broadcasts responses, is very clear and concise. The documentation from Microsoft is surprisingly good. However, we’ve seen issues with connections being dropped, messages getting delayed, and there have been problems along the way with the architecture of our application which was at times getting into circular message->broadcast->message chains. That said, I invested very little time in trying to make robust the Hub backbone to our application.

Recommendation: I don’t think that any of the issues we’ve come across couldn’t be resolved given more development time and production servers. The application architecture needs to be right no matter which library we use for real-time calls. If I had the need to develop real-time interaction I’d give SignalR a chance: it’s a great starting point and builds in a lot of powerful features.

D3.js is a JavaScript library for manipulating documents using data, with very powerful capabilities. We only scratched the surface of this, but it produced some very nice bar charts for us. Once I got my head around the syntax, changes to the graphs presentation and scaling were very easy to make; a sure sign of a well thought out library. 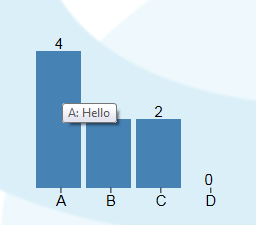 Recommendation: I’d definitely use this library again if I have client-side graphing needs. In fact, I just want an excuse to use it on something more complicated than a bar chart!

Distributed source control in its own right is definitely a good thing. The ability to pull incoming changes locally, handle them and commit a properly recorded merge action is valuable. I’d already scaled the learning curve for using a distributed source control system when trialling Mercurial some time ago. The concepts came back to me fairly quickly so I didn’t have to waste time on that this week.

I ended up using a few tools to work with our Git repositories:

Recommendation: I’d still recommend using distributed source control over non-distributed in general. I’d use Tortoise clients if we decided to do this at work.