LocalGovCamp is an annual “unconference” where the attendees set the agenda by pitching sessions, building a schedule, and taking part in the sessions that appeal the most to them. To people used to formal conferences, it might sound a little chaotic, but it works incredibly well and results in a highly topical and engaging event. 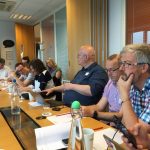 Sessions ranged in topic from Open Data, to low cost video streaming, to government as a platform. My colleague Samuel Martin found the session on text-messaging particularly thought provoking. He writes:

One topic that was pitched was on how text-messaging is a form of communication that the public sector could exploit better.

The discussion that followed was that text-messaging, in the sense of SMS from a mobile phone, is now a well-established communication channel. Research has found that text messaging typically produces faster responses than other forms of written communication. This has been exploited significantly by the private sector for example to record meter-readings, advise of appointments, track orders, carry out user satisfaction surveys, and other purposes. Participants considered that although there were some examples of the public sector taking up this functionality, for example schools communicating with parents and carers, there were other opportunities for wider use. Use of text messaging was seen in particular as being a potentially good way of interacting with hearing-impaired citizens.

This would obviously depend on councils or other public bodies having a record of relevant mobile phone numbers; this could be captured at any point of customer contact and recorded on a CRM system. Integrating SMS communication with CRM also allows the opportunity to deliver more personalised messages that can be recorded automatically as a customer interaction and automated customer journeys could be mapped and planned for.

However, the group recognised that some people do not keep their number when they change contract or SIM card and as numbers are reassigned there would be risks involved in relying too much upon this channel. This has an impact on the nature of the information that can be safely transmitted or requested. This may ultimately limit whether text messaging is used to transact services, or purely for one-way information sharing.

Importantly it was also noted that regarding “Text Messages” as only meaning “SMS Messaging” is now outdated. WhatsApp, Google Hangouts and Facebook Messenger are all regarded as text messaging and may offer further opportunities for interaction, beyond any existing council use of social media for publicity purposes. However none of the participants identified examples of the technology being used in this way.

What made this session, and indeed the format of the event, successful was that the people who participated were the right people to participate, and the topics were the right topics. This comes from the nature of allowing a diverse group of individuals, local authority officers, freelancers and suppliers, to join together and crowd-source issues and solutions without there being a top-down agenda.

We really enjoyed the events and look forward to seeing how the attendees and community continue to develop the ideas and discussions that were had.

You can read more on the topics and outcomes on the LocalGovCamp Blogs and Pics page.