How IT is changing the way we generate and distribute energy

Have you heard of the “smart grid”? The national generation and transmission of electricity is one of the defining problems of our time driven by concerns over energy independence, global warming and emergency resilience. To make the most of our resources and incorporate new power sources, such as wind, we will need a grid that is flexible, responsive and efficient.

At National Grid work towards the smart grid has long been underway.  Traditionally power is “broadcast” from a few central generators to a large number of users. Part of the smart Grid movement is that power will be optimally routed in response to varying conditions and using a variety of energy sources.

OCC is playing a part in this. National Grid already use OCC software to calculate the capacity of the most complex components in the network: supergrid transformers and buried high-voltage cables. In a joint project with OCC and General Electric these models have been installed into the national control room. Here they run continuously, taking the load on every circuit, calculating the present capacity of all components and flagging limiting circuits to control room staff. This lays the foundations for flexible, intelligent and responsive routing of power – a step towards the Smart Grid.

The next steps are underway. OCC is now working with National Grid on modelling the capacity and physical profile of overhead lines (the most visible element in our power network). Working smarter can have unexpected consequences; for example maintenance engineers working on an overhead line which is still charged at 400,000 volts. This is a practice that is being pioneered in the United States, where National Grid are now a major player.  To see this new and highly dangerous work in action, try watching this video. 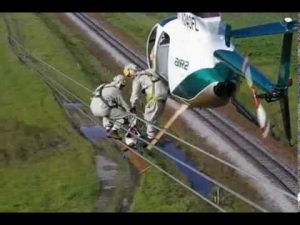 Don’t try this at home.