Medical device software in the cloud

It is forecasted that the global market for cloud based medical device software will reach £3.3 billion by 2024, compared to £1.5 billion in 2018. This growth is primarily driven by an increase in wearable hardware, along with the desire to reduce overheads associated with processing test results.

Cloud solutions offer companies access to the latest hardware and software at very little cost and effort. Furthermore, despite common misconceptions, cloud-based solutions offer better data security and data encryption as providers are constantly upgrading their systems. It can be difficult for smaller companies hosting their own services to manage this process.

To help transition their products and services onto the cloud, many businesses turn to software development companies such as OCC. Businesses may have the ability to code the functions that define their own IP, but not the specialised code required for each cloud host. Utilising OCC’s expertise in developing cloud based medical devices, making a switch can be both time and cost-effective.

OCC are working with Cytox, a company keen to automate and scale their processes using the cloud. Their genoSCORE-LAB processes a person’s DNA and calculates a polygenic risk score to establish the genetic risk of that person developing Alzheimer’s disease.

‘We derive genotyping data via DNA extracted from a simple saliva or blood sample and that patient data is processed and analysed using our own SNPfitRi software,’ explains Richard Pither, CEO of Cytox Group. ‘This analyses what is a very large data set of about 500,000 DNA variants that we all carry’.

‘It identifies single nucleotide polymorphisms, also known as SNPs (pronounced “snips”), which is the name given to any single position in our DNA sequence that can differ between individuals. Research has shown that certain variants of specific SNPs are associated with Alzheimer’s disease risk. Our tool combines them together in a weighted algorithm to produce a single score between zero and one, zero being very low risk, one being very high risk.’

Find out more about how genoSCORETM-LAB works

Alzheimer’s disease is the most common form of dementia in the UK, affecting around 60% of the estimated 850,000 sufferers. Dementia is an umbrella term for a range of neurological conditions that affect brain function and memory, often happening as we age. As life expectancy has increased over the last 30 years, so has the number of reported cases. In the UK, the NHS estimates the economic cost to be around £23 billion per year, which is greater than the expenditure on cancer, heart disease and stroke combined.

Using the risk score from SNPfitRi, pharmaceutical companies can perform clinical trials which are more cost effective by focussing on people who are most likely to develop Alzheimer’s. This will speed up the development of new therapies as well as finding a cure.

As a research tool, SNPfitRi had been running successfully for some time, but was limited to processing 100 samples at a time. To take the next step and expand Alzheimer’s research, Cytox wanted labs to be able to process thousands of samples per day without needing Cytox’s direct involvement.

‘We needed a partner to take our research level software and turn it into something that was robust and could be deployed as a regulated clinical product,’ highlights Richard. ‘At the same time, we decided it made sense to run it from a cloud-based platform which would avoid distributing hard copies to different labs around the world to run on laptops.’

Implementing SNPfitRi on the cloud

Before OCC joined the project, SNPfitRi was a desktop tool used to process new data files uploaded by labs across the world. Within six months, OCC’s developers converted this into a website with automated cloud processing capabilities. The key to achieving this fast turnaround was utilising Microsoft Azure. Creating a ASP.NET website in C# provides a robust code base that can be fully tested, which is essential for medical devices.

‘Cloud services allow the project to focus on the software needs of the implementation, rather than the hardware details,’ explains Tim Palmer, Head of Project Delivery at OCC. ‘In the past these jobs would have been processed by servers that had to be purchased or rented in advance and cost the same amount no matter how heavily they were used. This isn’t required with the cloud. Similarly, the storage of the data uploaded to SNPfitRi will grow and shrink in size automatically and Cytox will only pay for what they use.’

A lab technician using SNPfitRi will upload their SNP data using the SNPfitRi website, this is where the job is recorded and the data stored ahead of processing. ‘The most important part of SNPfitRi is the processing algorithms,’ highlights Tim. ‘Using Azure Functions, SNPfitRi will scale to meet demand as more and more labs use genoSCORE-LAB. When a processing job is triggered, the job is split into individual parts that are run in parallel using multiple Azure Functions, which use a shared pool of resources to run short processes.’ 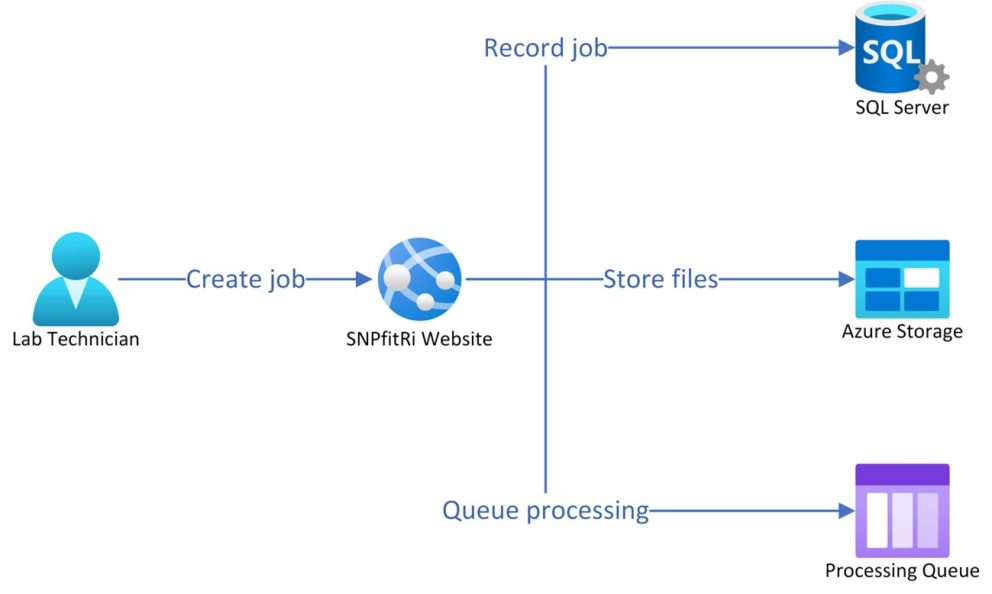 ‘When new jobs are created, new Azure Functions are also created to service those jobs,’ explains Tim. ‘When the jobs finish, the Azure Functions are destroyed. This allows SNPfitRi to process many jobs when the system is under heavy load, but when not being used, these Azure Functions don’t exist, so the cost to Cytox is minimised. This is one of the key advantages cloud processing has brought to the future of IT.’

The results of processing are stored inside SQL Server databases on Azure. Lab technicians can download results from the website, from anywhere in the world. Azure cloud hosting also automatically backs up databases, so if something happened to the physical server running the database, another server would kick-in to ensure SNPfitRi remains functional.

A key part of delivering software for medical devices is to ensure that they meet the standard and traceability requirements of the clinical sector. OCC worked closely with Cytox to fulfil the requirements of their Quality Management System (QMS) and regulatory officer alongside our own Standard Operating Procedures (SOPs) for software development. These include rigorous practices for design, development, reviews, testing and traceability, which provide the evidence required for a medical device technical file.

Cytox have recently announced their launch in the US having partnered with ‘Sampled’ (formerly Infinity BiologiX) who will market the test as the ‘Sampled Alzheimer’s Risk Test’.  As more data is pushed through the system, changes and improvements will be implemented throughout the process from the user interface to the processing algorithms and data storage. ‘The new software allows us global reach from a single cloud platform, which gives us some control over who’s using it and how they are using it,’ highlights Richard. ‘We can actually interrogate the number of times the platform is being used.’

Projects of this nature require close collaboration. ‘Our team were very impressed with the solutions OCC came up with for the same problems we had come across, but OCC solved them in a slightly different way,’ explains Richard. ‘Of course, this all needed to be documented and verified, which OCC also took care of.’

OCC have a strong history of developing medical devices, so they have a quick and efficient process in place. ‘We can work together with either your preferred quality assurance officer, or with your in-house team,’ concludes Tim. ‘We adapt our processes to suit your requirements while implementing an efficient approach to delivering medical projects.’