Cadent asset management software case study Cadent is the UK’s largest gas distribution network and manages more than 80,000 miles of pipes which transport gas to 11 million customers. One of the biggest challenges that gas companies like Cadent now face is the shift from a centralised grid system to more localised energy production.

As the world chases a net zero carbon future, the way energy is produced, stored and distributed is changing. Renewable energies will dominate the global energy mix and could account for as much as 70% by 2040. Meanwhile the introduction of new fuels will continue, with hydrogen energy production predicted to increase by 503% before 2024.

This changing energy landscape threatens the future of conventional energy companies. These organisations must find their way in this new era of energy, while also managing the risks to their asset portfolio.

‘The energy world is more complex and uncertain than ever,’ highlights Richard Waine, Asset Strategy Manager at the time of the project at Cadent. ‘Our challenge is to try and understand those risks so that we can make the best decisions for our asset management strategies for the long term.’ 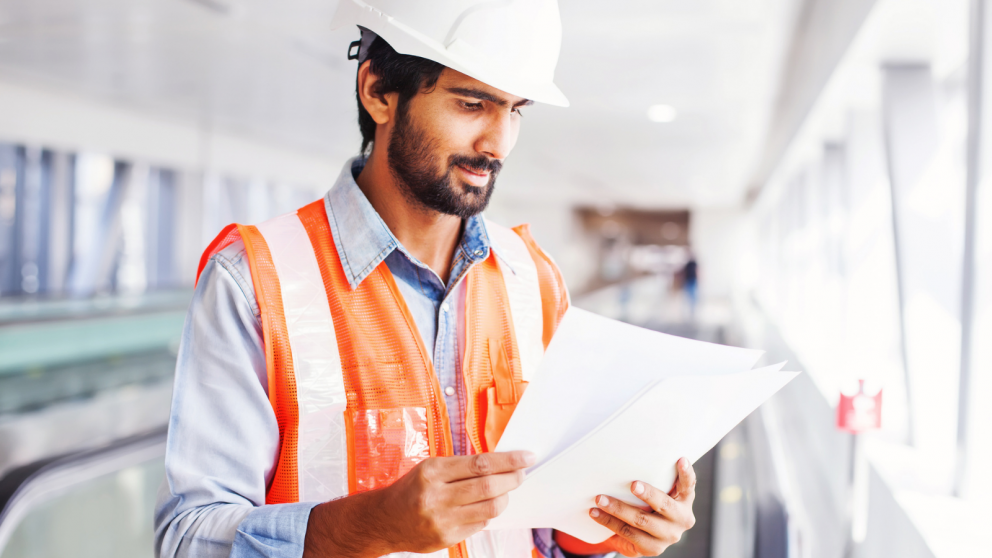 Cadent is the UK’s largest gas distribution network, managing more than 80,000 miles of pipes, and transporting gas to 11 million customers. One of the biggest challenges that gas companies such as Cadent now face is the shift from a centralised grid system to more localised energy production.

‘Since the 1960’s, the UK has sourced large supplies of gas and electricity from a few specific places such as power stations and the North Sea, which is then distributed all over the country,’ highlights Waine. ‘This is changing dramatically as energy is now being generated on a much smaller and local scale. With more local wind farms and solar panels in people’s homes, we are moving away from energy being generated centrally and distributed nationally. Instead, energy is now produced locally and needs to be distributed locally too. The challenge for us is that we are designed for a centralised world.’

‘The physics don’t work unless you start changing the system. Scaling that up to the hundreds of local areas within the Cadent network and it quickly becomes a significant technical, commercial, regulatory and financial challenge,’ says Waine. ‘So what does our network need to look like for the next 20 years? How do we keep the network going while also enabling the move to hydrogen?’

Finding the answers to these questions is a daunting task, requiring extensive research, data management and software expertise. Cadent turned to OCC for assistance. ‘I was aware of the previous work OCC had done in this sector and we wanted to embed a software approach into the project right from the very beginning,’ says Waine.

As with all project work, OCC began by undertaking an in-depth analysis of the project requirements. A comprehensive literature review was conducted, along with a project scoping exercise. This involved reviewing datasets and information available from open data projects. A series of workshops with key Cadent stakeholders were also run. Combined, these initiatives helped to define the problem from a top-level perspective, and to establish the key features, modelling requirements and data displays that Cadent needed from an asset management tool. 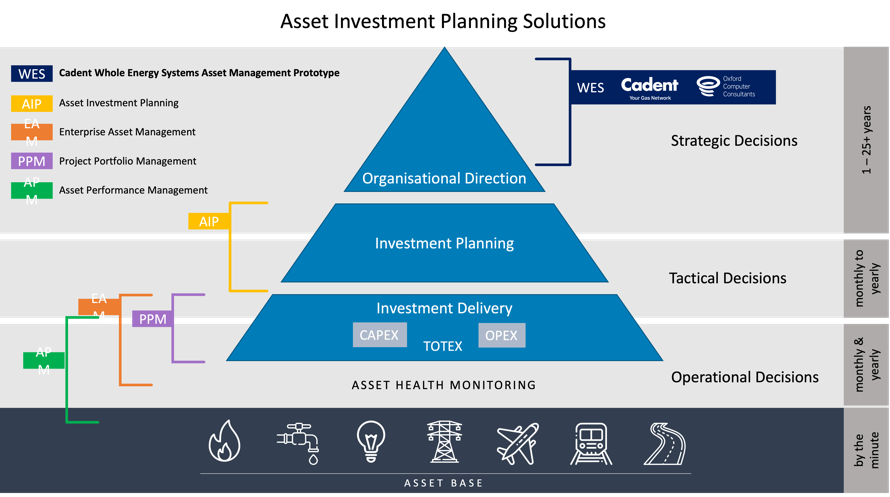 ‘OCC were great at getting to the crux of the problem,’ says Waine. ‘They are open and really listen to you so that they understand your challenges. Often when you’re so close to a project it’s difficult to zoom out. But OCC helped us get back to basics and provided some structure around defining the problem statement.’

From the findings of the literature review, OCC developed a prototype of a gas-focused asset management tool. Unlike other tools which primarily collate and display data, OCC’s solution incorporated a strategic element to help Cadent gain valuable insights into the data as well.

Users can specify the requirements and the factors which will shape decisions. The software will visually display the available options, and uses Sankey diagrams to show the best strategy. This helps users to understand factors such as:

‘The tool gathers and filters data from many sources which allows us to really understand what datasets are important,’ explains Waine. ‘It then provides some structure around linking that data to decisions and strategic planning which has been really powerful.’

The complex algorithms within the software are complemented with a clear, intuitive and aesthetic user interface. This not only makes the tool easy to use but has helped Cadent to raise the visibility of upcoming challenges and their potential solutions internally.

‘The user interface and design made it easy to sell the ‘what’ and the ‘why’ back into the business,’ highlights Waine. ‘It’s helped us move our thinking and discussions forward to the next phase, which is deciding on a strategy.’ 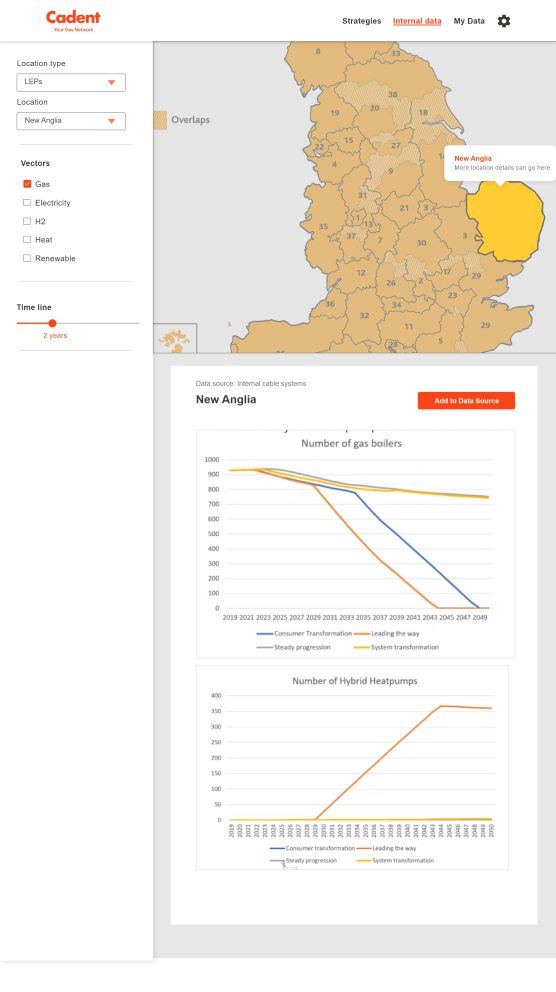 Data sets can be imported into the tool and visualised graphically on a map to help strategic planning on a national scale.

The next stage will be to progress from proof of concept to produce a prototype asset management tool which meets the minimum requirements to be a viable product. ‘Working with OCC has been a hugely positive experience,’ concludes Waine. ‘There was a collaborative way of working all the way through and they were able to bring all their energy sector experience to the project. Layered on top of that is their data analysis and software development expertise which they translated into a practical, usable tool that can be scaled up and rolled out across the business for multiple users.’