Park AI – Using AI to help clinicians monitor Parkinson’s disease In 2020, the average human-created 1.7MB of data per second, which equates to 2.5 quintillion bytes of data generated every day. Artificial intelligence (AI) has become a critical tool to effectively process this immense amount of data, making machine learning algorithms part of our daily lives. Whenever you use google, sat nav or social media, AI is working in the background to make your user experience more relevant, efficient and valuable.

One of the most important areas where AI is currently being exploited is in the development of medical devices. AI can be used to capture more accurate and consistent data from a patient, allowing clinicians to improve their delivery of care. An example of this is the Park AI app, which helps clinicians monitor the various symptoms of Parkinson’s disease. 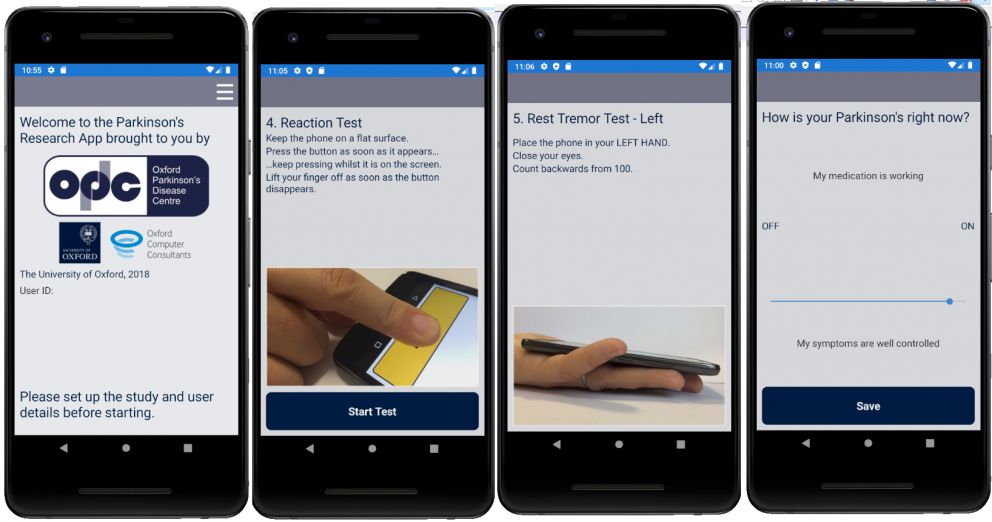 Parkinson’s disease is the fastest growing neurological disease in the world, with over 145,000 people affected by it in the UK alone. It is a progressive neurological disease caused by a loss of nerve cells in the brain which leads to symptoms such as involuntary tremors, slow movement and speech impediments.

These symptoms develop gradually over many years and vary significantly for each patient. Accurately monitoring the progression of these symptoms is key to improving the quality of life of patients and is something that has never been achieved before.

Parkinson’s can affect people very differently, yet this progression hasn’t previously been tracked or evaluated. At Oxford’s @oxfordPDCentre we’re developing cutting-edge #OxfordAI technologies to do just that, including our new smartphone app… https://t.co/AmrE7QZZP6 pic.twitter.com/pc8AVj6Hy4

OCC were tasked with developing a user-friendly mobile app, Park AI, which can be used by Parkinson’s patients to record data. This data is then automatically uploaded to an OCC developed cloud-based analysis engine, where AI code identifies a severity score of the patient’s Parkinson’s symptoms.

Funded by Lab10x, the Oxford Parkinson’s Disease Centre (OPDC) discovered that sensors in smartphones could be used to collect kinematic, speech and timing data from patients. OCC helped OPDC develop a mobile app for Android phones which guides patients through seven different exercises. The microphone, inertial sensors and the screen are then used to assess voice, balance, gait, reaction time, rest tremor or postural tremor as well as dexterity through finger tapping.

The sensors in a modern smartphone can be used to assess the symptoms of Parkinson’s disease.

When developing mobile apps, OCC first conduct a UX discovery and design which involves a stakeholder workshop to determine the user requirements. Once our developers have identified these requirements for the mobile app, technical investigations help to select the best technological solution. Often, we find ourselves using Flutter, Xamarin Forms or React Native to develop apps.

Park AI was created using Xamarin Forms which allowed OCC to create a simple UI quickly and incorporate OPDC’s analytical code. Throughout the development phase, OCC provided incremental software releases so that OPDC could monitor progress and feedback on development. To ensure the app not only worked but also achieved high performance across a range of smartphones, OCCs in house test team conducted a rigorous test programme on Park AI.

‘Patients could use this app several times a day for many weeks, so the most important design consideration was to make it easy to use,’ highlights Tim Palmer, Head of Project Delivery at OCC. ‘Once the clinician has configured the app, it’s one tap to start and the app then guides the patient through the different exercises. Each exercise is explained clearly, with the progress shown. This gives patients confidence in the app and clinicians confidence in the recorded data.’

The Nuffield Department of clinical neuroscience developed the original AI code which extracts statistical information from the raw sensor data. This is fed into a Random Forest Regression Machine Learning model which then establishes a Parkinson’s severity score.

The source code was written in MATLAB which limited the number of patients’ data that could be processed. To scale this up to run on the cloud, OCC rewrote the code in Python and optimised its performance to run in parallel and on demand.

To develop a robust, modular and testable analysis platform, OCC utilized Azure Functions. This Microsoft platform allows simple serverless computation triggered by events, such as the arrival of a new data file in the input folder.

Accompanying this code, OCC also built a website, making it easier for licensed organisations to register with Park AI, download the app and access results. The development of the mobile app, cloud-based automated analysis pipeline and the website has now made it possible to process millions of patients of data accurately.

ParkAI is one of the many medical devices that OCC has developed. This experience has helped OCC develop an agile and comprehensive approach to delivering medical devices, where every aspect is taken care of.

Working with your quality and regulatory affairs officer, we help you follow all the Medical Device Development (MDD) procedures and provide the necessary software documentation required for regulatory approval. We work with you to define the software requirements which we then track using JIRA Online or Azure DevOps. We ensure that each requirement has acceptance criteria and is rigorously tested both manually and automatically. Our process provides your key documents for regulatory documentation, including software requirements specification, verification report, and release notes.

For ParkAI, OCC transformed research quality AI code into a cloud-based product and accompanied it with a user-friendly mobile app and website. This allows clinicians to make quicker assessments of patients using more accurate methods without them even needing to visit the clinic. This improved efficiency could enable cheaper and quicker clinical trials, helping to develop new drugs and therapies. Ultimately, Park AI can help clinicians quickly identify long term lifestyle changes that can improve the quality of life of Parkinson’s patients. So, whether you are delivering your first or next medical device, our developers can help.